Wacom has a certain type of customer in mind with its beginner focus Wacom One pen display. With the Cintiq series catering to more professional standards, the Wacom One is their entry-level drawing tablet. Aiming to compete with the likes of iPad as a solution for the Windows system Wacom utilizes their experience well.

Though there are certainly areas to question that we found during our survey. A price point of around $400 puts a certain bar upon any drawing tablet. So just how well does the one by Wacom review? Is it the perfect introduction to drawing tablets, or another pretender in a competitive market? 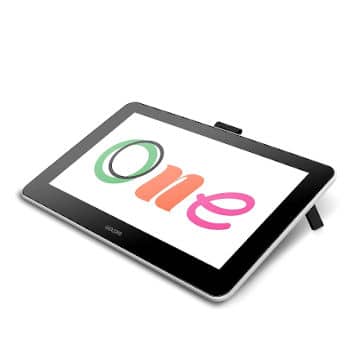 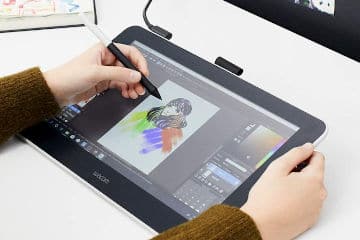 With a 13.3-inch screen and thin bezel, the simplistic appeal of the Wacom One is nice at first glance. It’s very thin with about a 4-pound weight so it can easily be moved around. The front looks quite similar to an iPad which isn’t necessarily a good thing. While it does look sharp you are limited to only a single button for functions. If you don’t mind using the screen for navigation this isn’t an issue. However, many of its competitors opt for six or more customizable buttons for easier navigation.

Connection requires three ports though you’ll find them all along one cable. The USB, HDMI, and power cable are all connected together. This can help with connecting everything quickly, however, it could also lead to pretty savage tangles. Once you get everything plugged in the functionality is plug in play for Apple or Windows computers. Underneath the Wacom One, you will find two fold-out legs. They aren’t adjustable but they do offer a 19-degree work surface for drawing a bit more comfortably.

The placement of the power lead also makes it difficult when trying to set it upright as a second screen. The battery draws power from an outlet instead of your computer as well.

You don’t have to worry about much as far as the resolution is concerned. A 1920 x 1080 allows for full HD art and is the industry standard for entry-level drawing tablets. This works well with the 13.3-inch screen to give you a decent drawing area without too much zooming. The color coverage is only 72% NTSC however, so you won’t get any noticeable pop.

The matte surface does help a bit though in giving you a paper-like feel for confident strokes. At the same time, they work against each other when there’s too much bright light. The overall effect gives you a much darker screen in bright light situations than you’d expect.

The included stylus is just as low-key as the rest of the Wacom one’s package. Simply succinct with a half black half white look. You can expect a decent feel from the pen with its matte surface. Though it is a bit lighter than other options in its range. The worst part about this pen is you will only find one customizable button without even an eraser to keep it company. On the other hand, its ability to charge while in use due to EMR technology is certainly appreciated.

Another nice aspect is its ability to reach 4,092 levels of sensitivity. Altogether the stylus can’t be considered basic even if you can find more sensitive options for less. One of this model’s main features is its ability to work with a variety of styluses, not just the included one.

The Wacom One advertises itself as the solution for a beginner’s introduction to drawing tablets. Luckily they end up hitting that mark for many people but not for others. With a price point near $400, Apple users may opt for a similarly priced iPad instead. However, Windows users or artists looking for a simpler experience will definitely find a use for the Wacom One.

The screen gives you an impressive working area and the responsiveness is a step ahead of the Apple competition. With a lacking color gamut, stylus, and complicated cord setup you might be able to find better options for less. This drawing tablet runs a tough equation between screen size, price, and functionality.

Can I connect my Wacom one to my iPhone?

Yes, connecting your Wacom One to an iPhone isn’t difficult. There is an issue with using a Wacom stylus, however. The Bluetooth abilities of the Wacom stylus restrict it to use with the iPad due to the pressure sensitivity.

How do I connect my Wacom one to my android?

First, you will probably pick up a USB-C hub so you can connect between any smartphone and computer. All you need to do is plug all of the cables into their proper port. The device will instantly put your phone onto your graphic tablet allowing you to open your art apps and get to work.

The Wacom One is made to bring the wonders of a drawing tablet to pretty much everyone. With an easy to use interface and extremely simplistic design, you can quickly get to work.  A single button on the pen display and included stylus give you a minimalist design. This does, however, affect your potential speed of productivity. A 13.3-inch screen with 1920 x 1080 resolution allows you to see everything clearly. Though the matte surface does struggle with brightness under heavy bright lighting. With a pen that is capable of 4,092 levels of sensitivity, the Wacom One covers all of the basics.

PROS
CONS
User Rating: Be the first one!
SaveSavedRemoved 0